Acting US Attorney Mohsin stated, “This is a very significant and important prosecution of a large scale, well-organized drug trafficking organization involved in the distribution of thousands of kilograms of cocaine worth tens of millions of dollars, across multiple continents.  I salute the entire law enforcement team who labored so tirelessly on this case, from prosecutors to police officers, federal agencies to local police departments.  Their efforts culminated in today’s indictment and demonstrate cooperation and teamwork at its best.”

Special Agent Martin stated, “This indictment of a major cocaine trafficker is the result of a joint investigation with law enforcement partners from around the globe.  Our combined efforts should send a clear message to drug traffickers everywhere that you will be held accountable for your crimes.”

Director Perry stated, “The complexity of this case, which involved so many law enforcement partners throughout the region is a testament to the importance of cooperation among agencies.  I’m proud of efforts of our CBP personnel, along with our federal, state, and local partners who played an important role in reaching this indictment.”

Chief King stated, “This is an excellent example of the inter-agency cooperation and capabilities of our investigative taskforce. The Farmington Hills Police Department is extremely proud of our investigator and his tireless commitment toward disrupting and indicting a large scale-international drug trafficking organization.”

As alleged in the indictment, Didani and other unindicted co-conspirators planned and financed the distribution of cocaine from several locations including the Eastern District of Michigan. According to the Indictment, in two transactions that occurred in June 2016 and December 2017, Didani received at least $550,000 from other co-conspirators for the purpose of purchasing bulk cocaine.  Allegedly, Didani and other co-conspirators used several means of transportation, including private aircraft and commercial containerships, for purposes of obtaining and distributing the cocaine throughout Europe.

According to a criminal complaint that was unsealed on April 1, 2021, following Didani’s arrest on March 31, 2021 in Charlotte North Carolina, it is alleged that Didani was the leader of an international drug trafficking organization with ties to the United States, Mexico, South America, and Europe. The complaint also alleges that in 2017, a co-conspirator in Didani’s organization was overseeing the design of an underwater drone that would be utilized to transport large quantities of cocaine to Europe. The drone, which was going to be equipped with an underwater modem and GPS antenna, would transport the cocaine while attached to the bottom of a commercial containership. The drone would then be remotely released from the containership off the shore of Europe. The drone and cocaine would then be picked up by a fishing boat controlled by Didani’s organization.

The criminal complaint further alleges that Didani arranged the distribution of several shipments of cocaine from South America to Europe, where the cocaine was seized by law enforcement. In 2019 and 2020, Law enforcement seized over 3400 kilograms of cocaine from Didani’s organization. The seized cocaine has a street value of over $100,000,000.00.

It is important to note that an indictment is merely a charge and should not be considered as evidence of guilt. The defendant is presumed innocent until proven guilty in a court of law.

Torpedo: The Double Life of an Accused US-Albanian Drug Trafficker

Illustration by Jurgena Tahiri/BIRNBesar Likmeta, Edmond Hoxhaj and Perparim IsufiTirana and PristinaBIRNApril 20, 202107:04In 2018, Albanian prosecutors dropped a money laundering probe into Ylli Didani. Less than two years later, he was arrested in the US on charges of trafficking significant amounts of cocaine to Europe and laundering the proceeds.

According to the US Drug Enforcement Administration, DEA, 43 year-old Didani led a double life, ostensibly mining for minerals while in fact smuggling cocaine from South America to Europe and laundering the proceeds.

But while a six-year investigation in the US resulted in Didani’s arrest on April 1 in North Carolina, prosecutors in his native Albania dropped a probe in 2018 into suspicious bank transfers of hundreds of thousands of dollars.

The case was handled by Alket Mersini of the Tirana Prosecutor’s Office, who was dismissed in December last year by an independent body created to weed out corrupt judges and prosecutors, ruling that Mersini had failed to explain the origin of his wealth.

Reached by phone, Mersini told BIRN: “I don’t remember the case. I’m taking some time off.”

A lawyer representing Didani could not be reached for comment.

753-kilogram of cocaine seized on August 11, 2019, at the Port of Rotterdam onboard the MSC vessel Anisha R. Photo: US Court Documents

The DEA says Didani headed an organisation dealing in “large-scale cocaine trafficking and money laundering”, which designed an amphibious drone for the trafficking of cocaine from South America to Europe and had financing from Michigan telecommunications CEO Marty Tibbitts, until Tibbitts died when he crashed his Cold War-era RAF fighter jet in Wisconsin in 2018.

Just in the last two years, authorities in the US and Europe seized nearly 3.5 tonnes of cocaine allegedly trafficked by Didani’s group from South America to Bilbao in Spain, the Dutch port of Rotterdam and Belgium’s Antwerp.

According to the DEA, Didani’s organisation had links in North America, South America, Albania, Turkey, Germany, Belgium, Spain, the Netherlands and the United Arab Emirates.

As far back as 2015 and 2016, US authorities knew they were onto something when two separate searches of Didani’s iPhone during border checks at Chicago’s O’Hare airport yielded photos featuring large bundles of US dollars and Didani toting firearms. 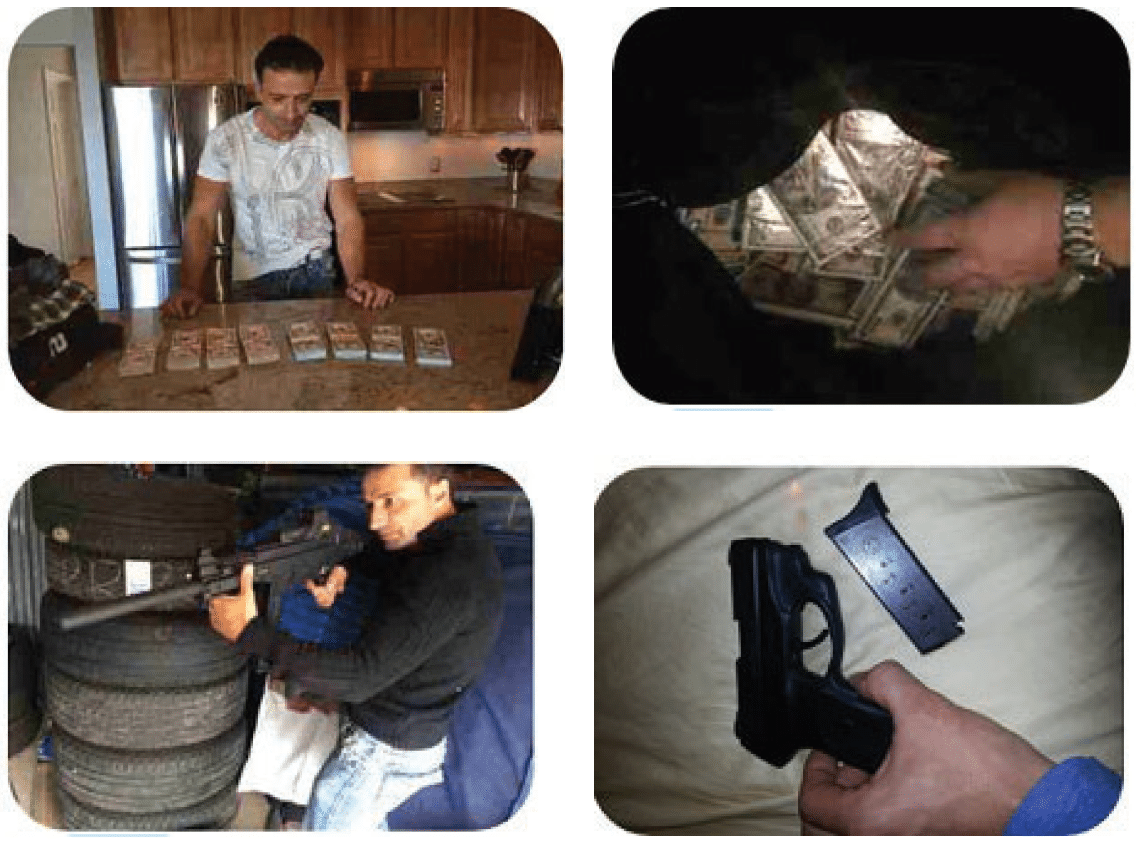 Photo from Didani’s iPhone when he is shown posing with guns and cash. Photo from US Court Documents

Two of the photos were time-stamped July 9, 2016 and geolocated to an apartment in Macomb Count, Michigan. The apartment at the time was rented to a person identified in court documents as CC-1. Investigators saw Didani at the apartment on several occasions during the summer of 2016.

According to the DEA, Didani and a contact named in his iPhone as ‘Dan Dan’ – whom agents say is CC-1 – exchanged Viber messages in July and August 2016 discussing illegal money transfers, receipt of FedEx packages, falsifying passports and the sale of large quantities of cocaine.

Didani also sent a picture of a red duffle bag containing multiple rectangular packages wrapped in red and yellow and which DEA agent Brandon Leach said were consistent with kilogram bricks of cocaine. The photo was accompanied by the message, “That’s ur house,” which Leach said meant that the profits from the sale of such a quantity of cocaine would be enough to buy a house. 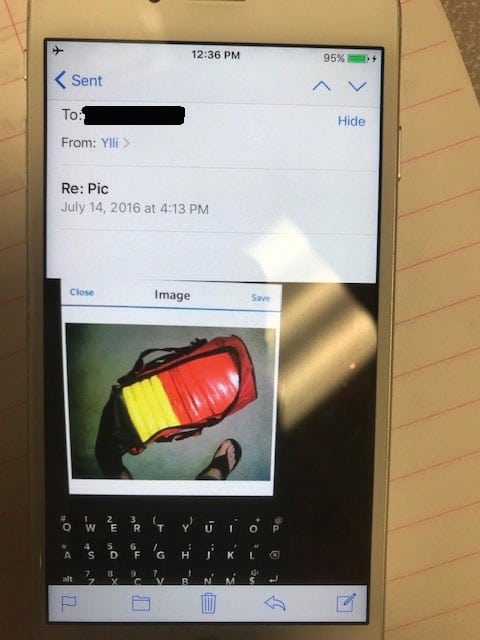 He then sent a picture of his Blackberry screen showing a conversation about finding someone to help move “100M euros” from Deutsche Bank in Frankfurt, Germany, to a bank in Dubai without the bank reporting the transactions.

Tibbitts was the CEO of a telecommunications company called Clementine Live Answering Service and the founder of the World Heritage Aviation Museum in Michigan.

As part of the money-laundering investigation, the DEA found that in 2016 and 2017, CC-1 received a number of large cashier’s checks from Tibbitts totalling $860,000, which he cashed in a gold shop and a pawn store.

“Through training and experience, I am aware that drug traffickers often utilize these types of businesses, instead of official banks, to launder drug proceeds in an attempt to remain undetected by law enforcement,” DEA agent Leach wrote in his statement. https://balkaninsight.com/2021/04/20/torpedo-the-double-life-of-an-accused-us-albanian-drug-trafficker/

Together, the cocaine had a wholesale market value of more than 80 million euros.

This publication (story) was produced with support from the Global Programme ‘Combating Illicit Financial Flows’ implemented by the GIZ and financially supported by the German Federal Ministry of Economic Cooperation and Development and the Norwegian Ministry of Foreign Affairs. 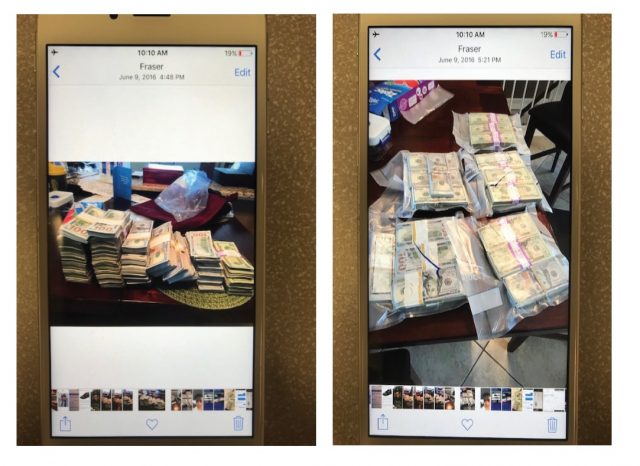